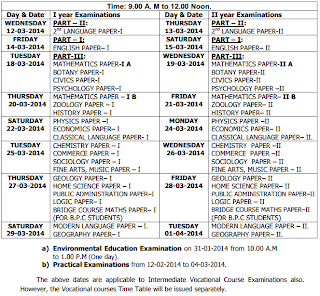 All the students who are going to attend the examination are here to request that they have to follow the New revised intermediate timetable instead of the old which they are aware of. This revised Inter 2014 timetable will be for both the Inter First year and the second year students who are going to attend the examinations in the academic year 2013-14. The revised time table is kept into display as an image which is shown above.

This time table is modified mainly due to the  festivals are noticed in the working days. So they had done some changes and kept them holidays for the festivals like Holi and Ugadi and modified accordingly. This time table is for the vocational students as well, The timings of the examination will be from 09:00AM to 12:00PM.