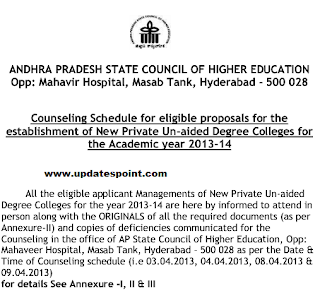 The counseling schedule for eligible proposals for the establishment of new private Un-aided Degree colleges for the academic year 2013-14 details are as follows. the eligible applicant managements of the Private un-aided degree colleges are informed that the candidates along with his documents which all are originals are required and the copies of deficiencies communicated for the counseling in the office of the APSCHE.
The counseling dates are
03.04.2013
04.04.2013
08.04.2013
09.04.2013
For more details visit the Annexure – I, II & III in – www.apsche.org