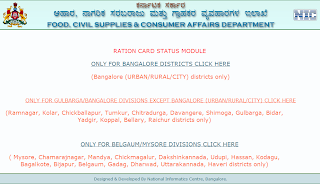 For the districts which are under Bangalore will able to know their status online which is separate to other districts is one division. The second one is only for the areas which are under Gulbarga/Bangalore divisions except Bangalore urban, rural and city because it has its own. The divisions under Gulbarga/Bangalore will be Ramnagar, Kolar, Chickballapur, Tunkur, Chitradurga, Davangere, Shimoga, Gulbarga, Bidar, Yadgir, Koppal, Bellary and Raichur districts.
Other than the above districts the rest of the divisions is grouped into one and can know their status which are under Belgaum/Mysore divisions. The districts under which these division are Mysore, Chamarajnagar, Mandya, Chickmagalur, Dakshinkannada, Udupi, Hasan, Kodagu, Bagalkote, Bijapur, Belgaum, Gadag, Dharwad, uttarakannada, Haveri districts.
Status can know under these divisions:
For Bangalore Rural, Urban and city division – http://ahara.kar.nic.in/status1
For Gulbarga/Bangalore Divisions – http://ahara.kar.nic.in/status3
For Belgaum/Mysore Divisions – http://ahara.kar.nic.in/status2