e-Admit Cards for National Defence Academy and also Naval Academy Examination in upsc.gov.in…..
e-Admit card for the NDA(I) examination 2013 which is conducting by the Union Public Commission of India. The UPSC will be conducting this year NDA and Naval Academy Examination in india on 14th april 2013. As the admission certificates which are uploaded on the commissions official website as www.upsc.gov.in in a downloadable format.
The reasons which the letters are rejected are also be uploaded and has been sent to their mails which they provided. If anyone are not able to download their e-admission certificate can feel free to contact the UPSC telephone no’s 011-23381125and 011-23385271 and 011-23098543 only in working hours i.e., from 10am to 5 pm. 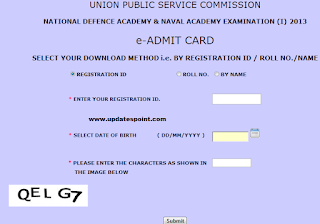 The candidates will won’t get their  any admission letters through posts they had to download it through online. The candidate can also get the venue information through IVRS system by calling to this number 011-
23074458.